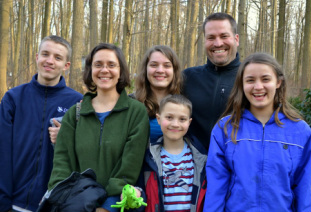 John was born and raised in Nyankunde , Zaire (now D.R. Congo).   As the son of missionaries, he saw firsthand the vital role of airplanes for missionary work in remote areas.  He was thrilled when, as a teenager, the Mission Aviation Fellowship mechanics allowed him to apprentice with them in the hangar at Nyankunde.  After his family returned to the States, John earned his Airframe & Powerplant license at LeTourneau University in Texas .  He also met his future wife there.

In 1996, John and Tara moved to North Carolina, where John worked for Free Spirit Aviation.  He obtained his pilot’s license and his Inspection Authorization certificate during his time there.  John helped found Compass Aviation as one of the visionaries.

John and Tara have been married since 1994 and have four children:  Aaron, Maggie, Audrey, and Mark.  John serves as secretary/treasurer of Compass Aviation while Tara home-schools their children and aids John with administrative duties for the shop and ministry. Their oldest son, Aaron, is apprenticing in the shop as part of a high-school elective.  He is learning and honing his skills as both a mechanic and pilot.